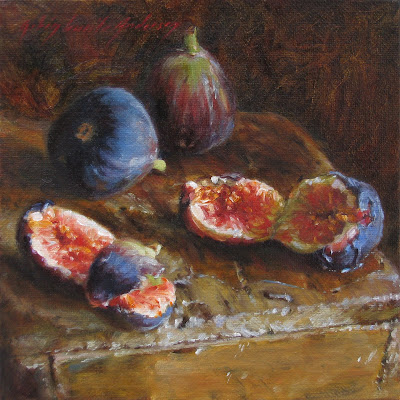 Posted on December 4, 2012
Robin Anderson is a talented still life artist from Southern California.  Her past subjects have primarily been flowers – often on a grand style.  “Figs” is a significant departure from Robin’s previous work.  The subject challenges more than pleases the patron; but that said, “Figs” pleases me greatly.  Almost everything about this painting is a serious departure from Robin’s past work including subject, condition of the subject, color, technique, atmosphere, space, and the intangible sense of life as raw, physical, and seductively beautiful.  Robin has done with her art what I would like to do with my life, if I were not so cowardly and proud; I believe that is the essence of her job as an artist.  Robin has undergone an enormous transformation and then showed it to us, without hesitation, with canvas and paint.
Robin painted this image from life, not a photo, and that alone explains a raw intensity to the canvas I have rarely seen in her work.  This painting is more accessible to the male sensibility.  It bleeds like an open wound earned in battle and worn like an emblem of courage.  If my image makes you uneasy, you have never played a dangerous, physical sport, or suffered an injury for a noble purpose.  Robin’s “Figs” capture both the immediacy and courage of living with natural forces.  Like “Figure With Meat” by English Painter Francis Bacon, Robin’s figs deliver the raw, intensity of nature minus Bacon’s surreal neurotic twists.
Figs are possessed of an ancient symbolism, endowing them with sacred status.  They are soft, sweet, often dark and brooding, yet when ripe, their flesh opens easily and bleeds truth.  Like the sacred heart of a Madonna in a dark, musty Catholic Church, ripe figs perform their Mass in Latin.  Even if we don’t understand the ancient language, we love the sacred rite as it pours over our troubled souls with the sweet bouquet of abundant redemption.  Robin’s figs bring this sense of the Mass, of life redeemed by blood sacrifice, as I sit alone on the back pew.  Toward the back of the table, Robin’s dark, uncut figs are beautiful in their simplicity, color, and anticipation, but are then entirely upstaged by the red, ripe figs already executed and oozing life on the ancient wood altar.
Robin’s new technique excites me on a number of levels.  The background space reflects the colors of the subjects, but with the ambiguity of a primal dimension where the sacred and the profane separate in the dark.  The rough hue of the wood table does not reflect the light of the image – as in some of Robin’s earlier paintings.  These figs are not concerned about reflected light; they are brooding, immediate, and possess a light of their own.  The wood table is rough and scarred from previous sacred executions.  This would be a terrifying image, the soul resting on the altar of its own destruction, but the figs willingly give up their flesh and blood.  It is their purpose.  It is why they exist.  It is also why I like the subject matter of this painting.
After all the analysis of symbol and subject, Robin Anderson’s “Figs” is simply a very good painting.  While open to analysis, it passes the ultimate test and qualifies as an accomplished, enjoyable work of art.  I would display this painting in my home with an arrangement of artifacts, possibly an antique crucifix or collection of eclectic but deeply evocative paintings and drawings.  With “Figs”, Robin crossed over to a new style and tapped into a new thought stream.  She showed us something of courage and sacrifice, and she showed us something of herself.  She can wear this canvas like an emblem of sacred courage. I look forward to her next painting. – Jim Eaton 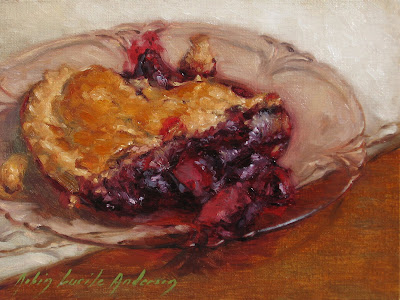 Posted on January 16, 2013
Interpreting art is dangerous business. So many personalities bruise so easily – fresh fruit, still life, and human ego have so much in common. Still, reviewing Southern California still life artist, Robin Anderson, is great fun and a risk worth taking. Knowing and reviewing gifted people is more amusing than possessing talent itself.
Accommodating change is the most difficult process humans endure; in our small, inner world, memory fades behind a veil of distorted vision. Ultimately, memory becomes happier, and sometimes more sad, than the actual moment. But the demands of time are dominant and memory will endure in its imperfect, partially hidden world, peeking out from behind the semi-translucent veil of moments past. Robin Anderson parts the veil to the unconscious and allows us a glimpse.
Artists have a sacred duty to bring veiled memories to light. The talented artist is the midwife that delivers us to the understanding we normally choose to ignore, but in wisdom, we finally embrace. A talented artist never performs this sacred task directly; the artist is grounded by indirect inference. The observer too, like the artist, must struggle for meaning or the baby will never be delivered. The artist’s technique is not the source of initial engagement – although that inspection comes later. A painting’s success is revealed by engaging the sense of humanity and memory, both present, and standing just the other side of gauzy veil.
Robin Anderson’s new paintings qualify as the midwife of change – indirect, veiled, possessed of joy and sadness, and almost present, if not for the small distance separating memory from the now. Robin is painting something far more significant than still life. Robin is representing a deeper aesthetic. Her current paintings incorporate a sense of the moment, of insight, and tear at time to let consciousness breath.
I am always aware of my male sensibility when judging art. When a man judges another man’s art, the process of aesthetic appraisal is much easier. But when a man judges a woman’s art, the process is much more complex; as with all gender communication, this is more a problem of exposition than insight. While I recognize the feminine intelligence of Robin’s hand and eye, I also recognize that she is expressing ideas universal to all humankind, independent of mere gender, and offering a more successful aesthetic available to both male and female sensibilities. This is the talent and the accomplishment of a gifted artist.
The two paintings above, “Tangerines” and “Geraniums” are new arrivals to Robin’s family. She has clearly made a dramatic effort to separate from her former studied technique of still life on a grand scale. It is less that these paintings are less grand and more that they are just so much more accessible. They are human, common, imperfect in form and frame. They are wounded by life, yet filled with all the human divinity that inspires life on a grand scale.
“Tangerines” is reminiscent of Robin’s recent “Figs” in design and presentation, yet reflective of the place citrus has in the well-lit palette of culinary sense and oil on canvas. The tangerines reflect the light in the room. They enable a reflection on the polished table. They do not brood. They are not guilty. And they have nothing to confess. The vase in the background is a classic piece, partially framed, and the image lifts. The tangerines are both whole and partially crushed. This is an important representation. The dichotomy of what is apparent and what exists on the inside is an important vision. More, the fact that what exists on the interior is partially crushed and oozing life is what catapults the meaning of the images to a higher level of philosophical and psychological drama.
“Geraniums” is also a very good painting, but for different reasons than “Tangerines”. It is beautiful and immediate, common, but also noble. It is pretty in the feminine sense, but commonly accessible to all. With “Geraniums”, the eye will naturally follow the image without being condemned for staring. The pedals are not studied. The stems follow a natural course, weighed down by life itself. The simple fruit jar holding the flowers distorts the image behind the veil of glass and water, causing memory, leaf, and plant stem to dissolve into a recognizable chaos. The painting affects me as does a still life by Manet painted over a century ago. For Robin to arrive at the same place as Manet is only the highest of achievements and makes me want more, very soon.
Of no less importance is the background for each painting. Figure is only known in context. Robin’s context offers a germane background that does not demand attention unless you choose it. This matter immediately takes me to technique. The brush is intense and lifting, swirling the eye behind the formal image. I like this technique as much as I like the painting’s subject. A bad context will ensure a bad painting – Robin sidesteps this problem very nicely.
Robin’s art is changing. That may be a source of its immediacy and risk. This is a moment in an artist’s history that is recognizable, vulnerable, and disappears as the norm becomes the established and the creative opening closes. This is the energy of Robin’s work that evokes the sense of memory and humanity lost in time, yet present in the chaos of present life. – Jim Eaton
http://www.nationnotes.us/ 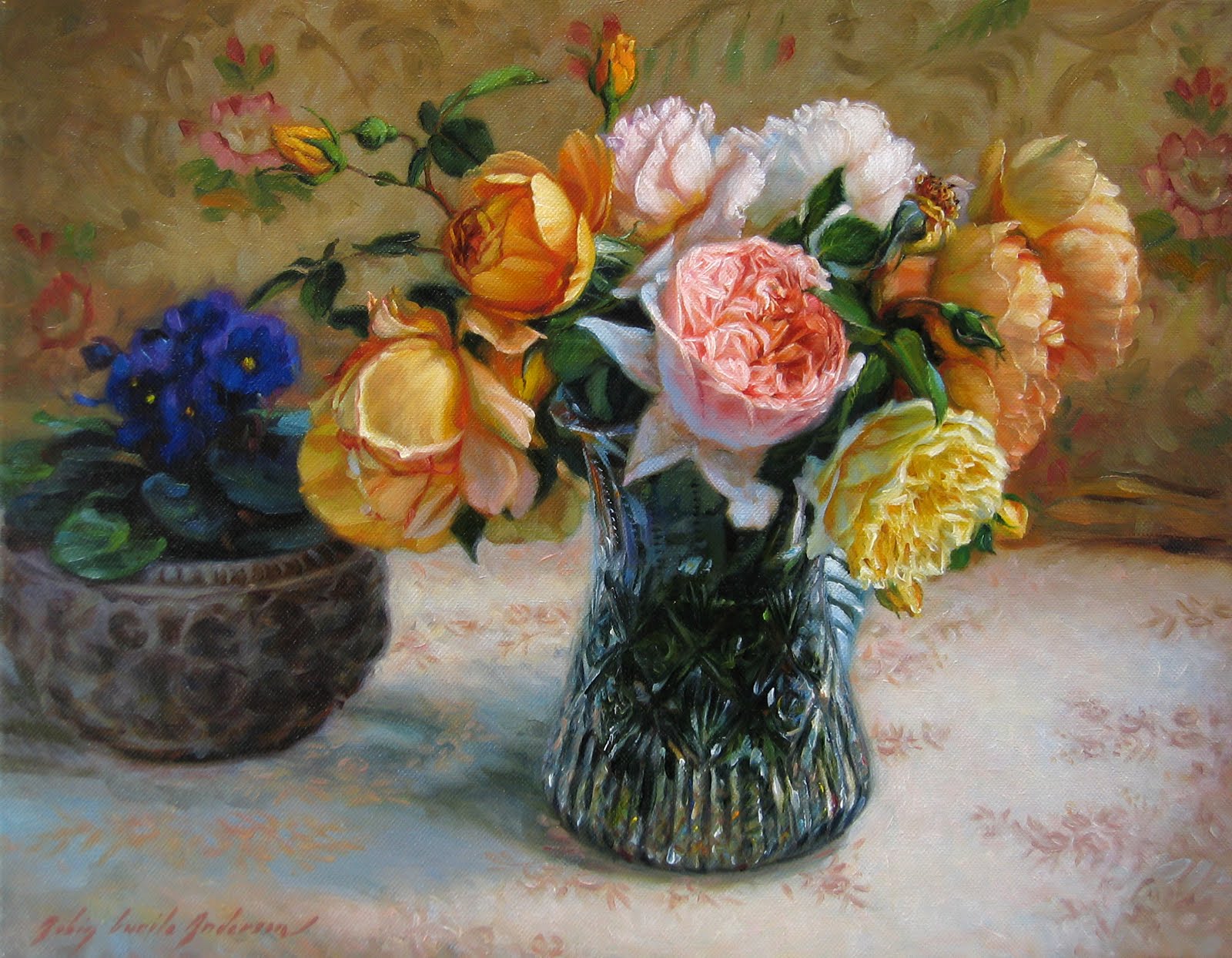 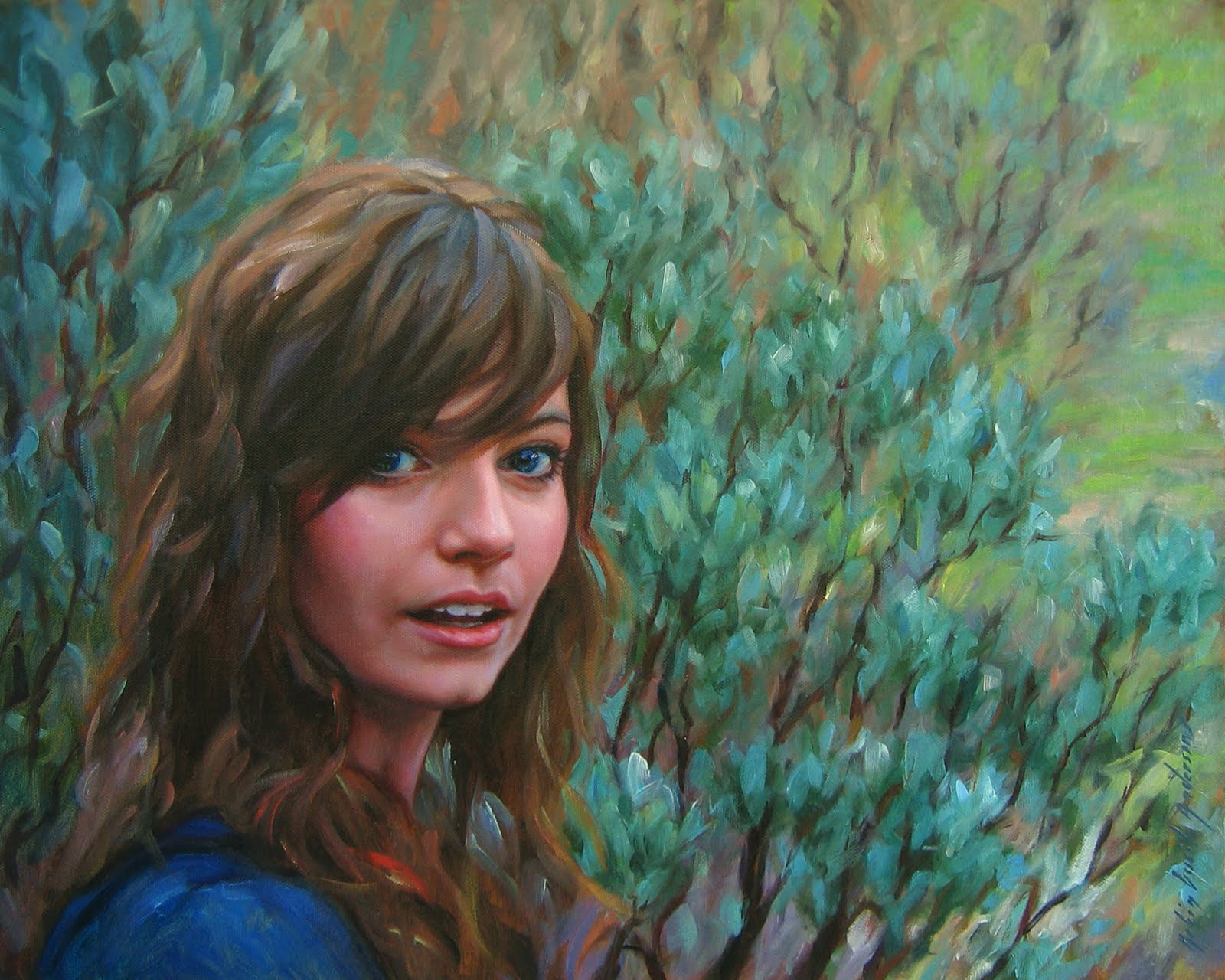 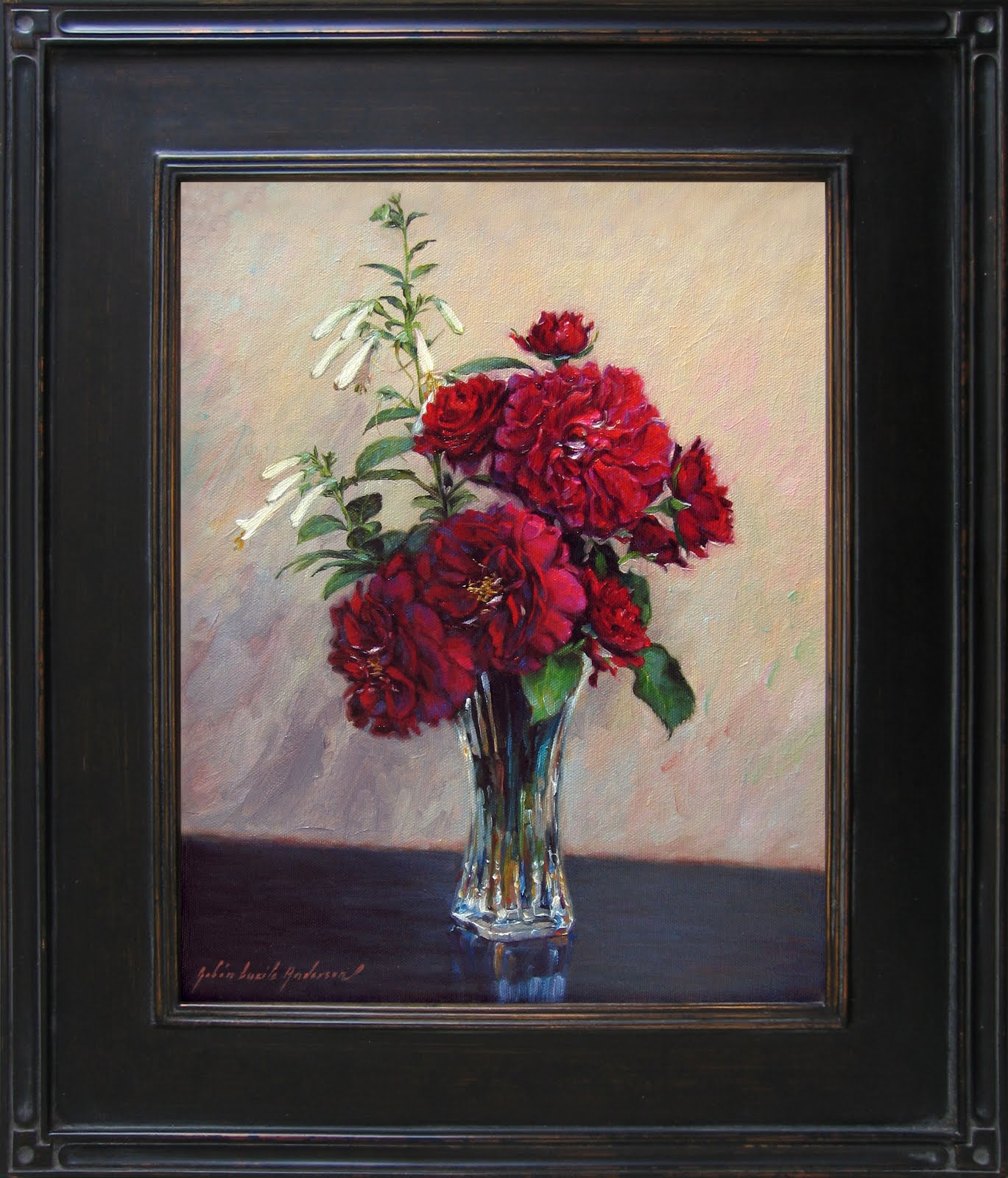 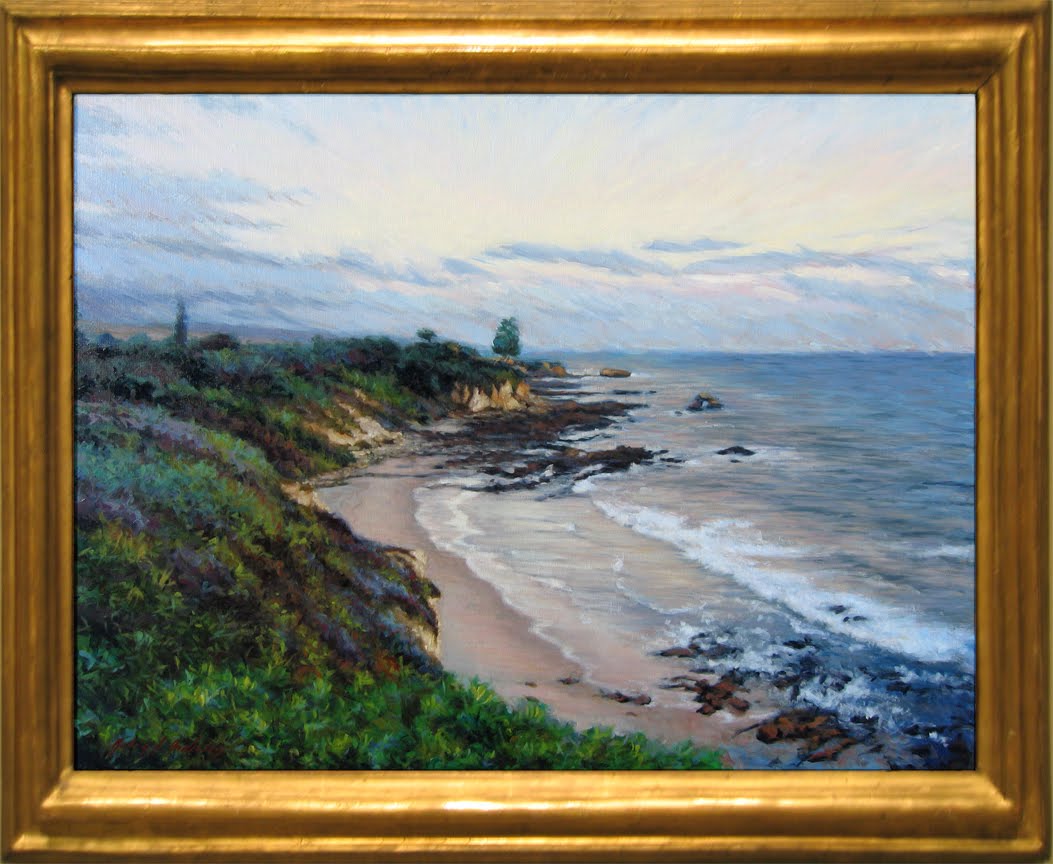 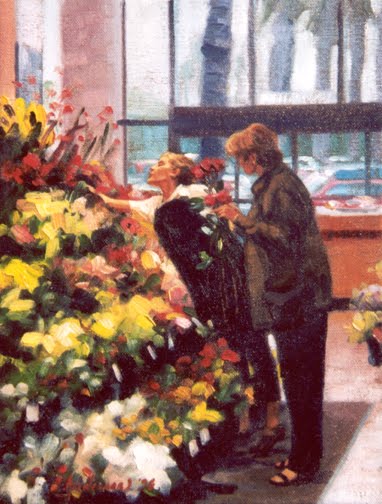